What’s your story?
Andrea: I was born and raised here in Kansas City, Mo. My father taught me to drive when I was six years old. He would tell me, “Don’t ever be dependent on no one to get around.” He didn’t want me to ever get stranded. If I can’t do anything else, I can drive.

I was pregnant at 14 and I got married very young in high school. I had two kids. My husband was in the service and we traveled a little bit, but I always drove. I worked for Jackson County DOT. I worked driving school buses. But I like being a bus operator and seeing the diversity. I like seeing different people. At other jobs, sitting in an office somewhere, I would never see the people that I see driving. You know, the good, the bad, the ugly. I like seeing all of that.

Victoria: I’m the youngest of nine. My mom passed away when I was five and we were raised by my grandmother and then my father. He passed away and my life took a turn for the worse. I hooked up with a young man and had four kids with him. I also became addicted to drugs.

In June of 2005 [while living in New Orleans], I was walking through my house and I heard a voice say, “Leave this place.” So I went to my sister the next day and I said, “I’m going to Kansas City, Missouri.” In August, we watched Katrina unfold on television from up here. It was like God said, “Move,” and I moved.

When I first moved up here, I did an interview with the local news and they asked me what is it that I wanted to do. I told them I want to drive y’all’s city buses.

I used to catch this one particular bus every night and Andrea was my driver. I would sit in the front and I could see her face and she could see mine and we would talk. We have been together ever since. Married for two and a half years, together for 14.

My weakness is her strength, and my strength is her weakness.

When I was thinking about becoming a driver, Andrea pushed me. She said, “I think you can do this.” I didn’t have confidence in myself. I was scared. The real thing was, I was okay with being lazy. I was okay with where I was. She wasn’t okay with it though, and so she brought me with her. And here I am.

I love being out there talking to people. When a passenger asks me how I am doing, I say, “I’m grateful.” I love this job.

When I came out, my brother stopped speaking to me for four years. We were best friends. But eventually he saw I was doing good for myself, and he was crazy about Andrea and the way that my life had just blossomed. He loves me today. It was like we never missed those four years.

I’m a praying fool. I believe in that man upstairs. You know a lot of people say gay people are going to hell. I don’t believe that. They told me to find a God to my understanding. My God loves me regardless. He brought me in this world. He knows all about me.

I feel like I went to drugs because I couldn’t say who I was. This is who I am, and I’m clean today because I’m being myself.

What does PrideKC mean to you?
Victoria: It means a lot. I’m glad to be given a voice because I’ve seen transgender people get harassed. We won’t allow that on the bus.

I’m grateful that RideKC is opening up to the gay community.

I don’t know if y’all understand how many lives y’all about to touch with putting this rainbow bus out there. Just this one bus. That’s a statement to the whole gay community.

They are going to know that on the bus, they don’t have to worry.

What do RideKC safety improvements mean to you?
Andrea: Driver and passenger safety on board the buses is getting better. The police presence, quick response time, operator shields, refresher training, making it a felony to assault us, all show an effort.

What is your favorite RideKC destination?
Victoria: Home! And there’s a bus route one block away.

What’s your most memorable RideKC experience?
Victoria: I was driving the Indiana route and I got ready to get off the bus and was singing “Let Go and Let God.” It’s a song that I sing all the time because I love gospel music. This young lady gets off the bus and she’s crying. So I said, “What’s wrong? Put it on my shoulders.”

She tells me she had four kids and she was hooked on drugs. This lady was telling my story to me! I said, “Here’s what you need to do. It’s time for you to turn to God. All you got to do is let go and let God like the song says.”

I was driving years later and she saw me and said, “You talked to me by the zoo! You’re the one that said I got to let go and let God. I got off drugs and turned my life around because of you.”

What do you wish everyone knew about RideKC?
Andrea: People that do not ride the bus think something bad is going to happen. They hear some crazy story, but those are rare. It’s mostly working people on the bus trying to get home or get to work.

Victoria: We are professionals and we are always thinking “Safety First.”

What are you looking forward to in RideKC’s future?
Andrea: Prospect MAX! 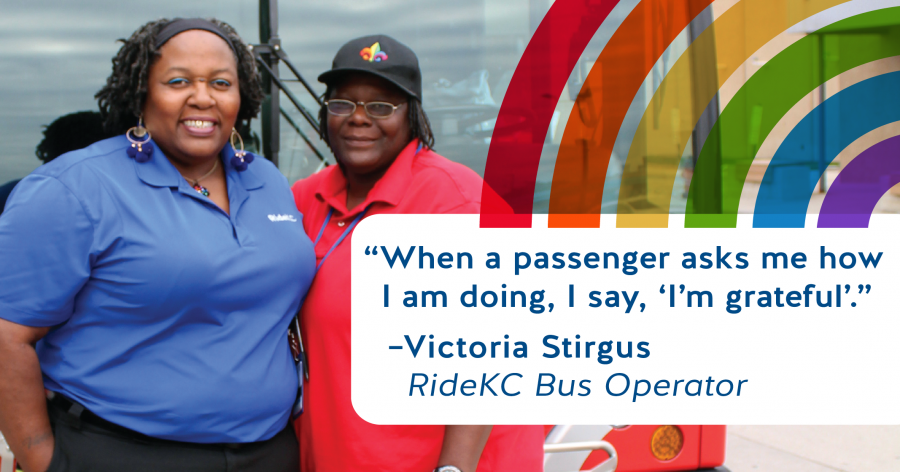