Bus shelters will have a new look, new features

NOTE: The survey mentioned is now closed. Feedback was gathered in August and early September 2019.

RideKC recently freshened up MAX shelters along Troost MAX, and RideKC’s bus shelters on local routes are next. The blue metal and gray, domed plexiglass shelters will be replaced within the next year.

Many of RideKC’s bus shelters are requiring more and more repairs due to rust, aging paint, and leaking seals. It is time to replace these shelters, and we are excited to upgrade them. 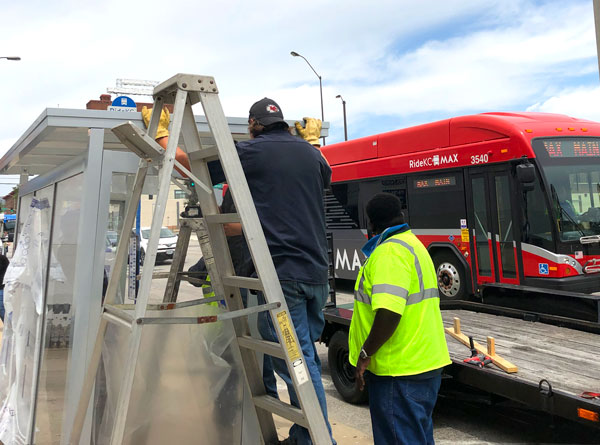 KCATA crews install a demonstration shelter at 19th and Grand.

RideKC has placed four demonstration shelters at various bus stops, and we are asking you to take a look at them. We want to find out what’s most important to you in a bus shelter. You don’t need to travel throughout the city to check them out, because we’re giving you a video tour of each.

In addition to customer feedback, RideKC will consider other factors, such as cost and maintenance of new shelters. (NOTE: Survey closed Sept. 13.)

The demonstration shelters are located at the following bus stops:

You don’t have to visit the stops to get a look. Take a look at these videos, which are also available in the survey.